Recently our friends at Quicksilver Scientific introduced a therapeutic “shot” formula called IMMUNE CHARGE+™. This unique product takes immune support to the next level. It is a potent, high-dose liposomal blend of foundational vitamins C, A, D, E, K1, K2, and Haschberg European black elderberry — all delivered in a single 12 ml (0.4 ounce) shot that supports your body’s first-line defenses against unexpected health challenges.

I am highly impressed with IMMUNE CHARGE+ shot formula. Most people, including myself, feel its effects almost instantly after taking a shot and holding it for 30 seconds in the mouth before swallowing it. This is due to the 1) amazing properties of liposomal delivery and 2) therapeutic levels of key ingredients.

If you’re looking for an immune boost that will take you through your day, I can’t think of a better product. Even if you’re already supporting yourself with supplements, I recommend IMMUNE CHARGE+ for those times when you need an extra boost to your immune system.

IMMUNE CHARGE+ supports respiratory health and function, powers healthy inflammatory response to unwanted invaders, and has unsurpassed bioavailability of both premium elderberry (without the sugar load in typical extract) and known immune-support vitamins.

IMMUNE CHARGE+ is an intentional mix of six bioavailable vitamins that work synergistically to promote respiratory strength, cellular integrity, and year-round resiliency. Combined with Haschberg European elderberry, known for its immune system benefits — finally in a form your body can use — the result is a powerful liposomal “shot” for immune defenses.

IMMUNE CHARGE+ supercharges the immune system.  It is in a class by itself when compared with other immune support formulas—offering rapid liposomal delivery—and thereby unparalleled bioavailability of its immune-bolstering ingredients. In addition to kicking off a robust immune response and up-regulating white blood cell production, Immune Charge+ formula protects cells from pathogen-induced harm and attenuates excessive inflammation.

Health Products Distributors, Inc. normally sells IMMUNE CHARGE+ in cases of 12 shots, but for a limited time we are selling it in smaller amounts (as little as one bottle) so customers like you can experience these powerful effects! Order a bottle or two (or more), and see how effectively it works for you. 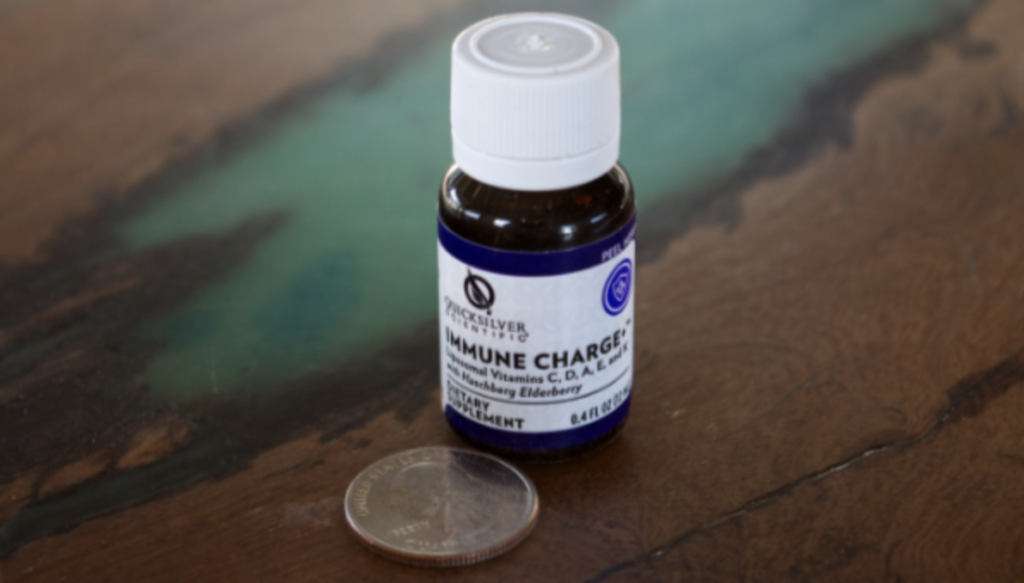 SUPPORT BARRIER INTEGRITY
The epithelial cells of the skin, lungs, and gastrointestinal tract serve as a first-line of defense against microbial invaders, including viruses responsible for respiratory infections such as colds and the flu. Vitamin C supports epithelial barrier integrity, enhancing the function of these fundamental defense systems.

ANTIOXIDANT PROPERTIES
Vitamin C is a potent reducing agent, meaning it readily donates electrons to electron-deficient recipient molecules (also referred to as free radicals), stabilizing their biochemical structure and inhibiting a chain reaction of oxidative stress. Vitamin C’s ability to terminate these harmful chain reactions makes it one of the body’s most crucial antioxidants. In fact, vitamin C is the body’s primary non-enzymatic, water- soluble antioxidant in blood plasma and tissues. The potent antioxidant properties of vitamin C make it a valuable ally for optimal immune function.

Bacterial and viral infections trigger the production of free radicals by immune cells. While these free radicals have an essential purpose — to activate the innate immune response and directly destroy invading pathogens such as RNA viruses — they also have the unintended consequence of damaging our own cells and organs, such as the lungs.Vitamin C attenuates pathogen-induced free radical damage, protecting cells from harm while the immune system is hard at work eradicating infection.

Vitamin C also boosts the activity of other antioxidants vital to the immune system. It recycles the fat-soluble antioxidant Vitamin E and increases endogenous levels of glutathione, the body’s premier antioxidant that also fine-tunes the innate immune response to viral infections.

Inhibits Virus-Induced Inflammation
Viruses activate the NLRP3 inflammasome, a multiprotein complex that plays a crucial role in innate immunity and the production of pro-inflammatory cytokines. Excessive NLRP3 activation contributes to a phenomenon called a “cytokine storm,” an overproduction of immune cells and their activating products, cytokines. Cytokine storms occur in the end stages of severe infections, causing symptoms such as acute lung inflammation and fluid buildup in the lungs. The cytokine storm can thus severely sicken, and sometimes kill, patients. Attenuation of NLRP3 inflammasome activity may inhibit excessive inflammation in viral infections. Vitamin C inhibits the NLRP3 inflammasome and may thus help inhibit virus-induced inflammation.

Emerging research suggests that intravenous Vitamin C is useful for the treatment of severe viral infections. Unfortunately, vitamin C IVs may not be accessible to many infected patients. Liposomal vitamin C has been found to offer a greater degree of bioavailability as intravenous (IV) vitamin C in a more convenient and less invasive delivery system.

Vitamin A maintains epithelial barriers in the human body, including the epithelial lining of the lungs and the gut mucosa, where a significant portion of the immune system resides. Vitamin A deficiency compromises immunity in the lungs, rendering them more susceptible to respiratory infections. Vitamin A deficiency also impairs the immune response to intranasal vaccination for respiratory syncytial virus (RSV), a human virus that causes respiratory infections, thus suggesting that this nutrient is crucial for the development of the host immune response to envelope viruses. Altered Vitamin A metabolism is also suspected to play a role in the pathogenesis of influenza.

Finally, Vitamin A supports immune homeostasis by activating immune cells when they are needed to combat infectious threats while attenuating excessive inflammation.

Vitamin D has pleiotropic benefits for immunity. Vitamin D receptors (VDR) are present on most immune cells, indicating their indispensability as components of the immune system.24 Vitamin D deficiency has repeatedly been independently associated with an increased risk of viral infections.

Vitamin D modulates both the innate and adaptive immune responses to respiratory viruses. In the presence of viral infection, lung epithelial cells convert inactive vitamin D into the active form, increasing the expression of a peptide called cathelicidin, which has antiviral effects. Vitamin D also modulates the immune response to respiratory viruses and protects the lungs from damage caused by pro-inflammatory LPS.

Vitamin E is a fat-soluble antioxidant that protects the polyunsaturated fatty acids in cell membranes from oxidative damage, which can be triggered by microbial infections. It increases white blood cell proliferation, immunoglobulin levels, natural killer cell activity, and antibody activity, thus supporting broad-spectrum immune function. In our formula, we use a special form of Vtamin E called DeltaGOLD® tocotrienols, which offer fifty times the antioxidant activity of tocopherols, the form of Vitamin E used in most competitors supplements.

Vitamins K1 and K1 are fat-soluble vitamins that work in synergy with Vitamins A, D, and E to support healthy immune function. Vitamin K1 (phylloquinone) has anti-inflammatory properties through inhibition of the NF-κB pathway. Vitamin K2 modulates the immune system, decreasing immune reactivity and helping to manage the inflammatory response.

Elderberry is a small dark purple berry that has been used for centuries in traditional herbalism as an aid to the immune system. In this formula, we use Haschberg variety European black elderberry, known for its high potency in anthocyanin flavonoids.

When unwanted invaders irritate the immune system and turn up inflammation, other star performers Vitamins A and D work with elderberry to strengthen and fortify your body by helping to balance inflammatory and immune responses. Highly bioavailable Vitamin E kicks in with 50 times the antioxidant activity of typical tocopherols, alongside Vitamins K1 and K2, which help manage the body’s positive inflammatory response.

Elderberry has direct antiviral activities, demonstrating mild inhibitory effect at the early stage of viral infection and a considerably stronger response in the later stages of infection.Elderberry exerts antiviral effects by blocking the function of hemagglutinin (HA) glycoproteins present on the surface of viruses, such as the influenza virus and coronaviruses. When the binding of these spikes to host cells is inhibited, viruses cannot enter the host cell to replicate and cause infection. Elderberry also binds to neuraminidase (NA), an enzyme necessary for viral replication, as indicated by mass spectrometry and molecular docking studies.

The ability of Elderberry to target viruses through multiple pathways may make it unlikely to trigger antiviral resistance, a common problem with antiviral pharmaceutical drugs. Given these findings, it is no surprise that a meta-analysis of RCTs found elderberry supplementation effective for the treatment of upper respiratory symptoms, which are frequently caused by viruses. In fact, one study found that overseas travelers using elderberry for 10 days before traveling and up to five days after arriving experienced a two-day shorter duration of the cold (on average), along with noticing a reduction in symptom severity.

Elderberry’s antimicrobial activity is not limited to its effects on viruses. It also inhibits the growth of clinically relevant bacteria that can cause infections, such as pneumonia that are secondary to infection with a respiratory virus.

Elderberry is an immune modulator, enabling a robust immune response while inhibiting excessive inflammation. Elderberry also coordinates a more efficient immune response by mobilizing antiviral innate immune defenses, including the release of the cytokines IL-6 and IL-8. The antioxidant anthocyanins found in elderberry may quench excessive inflammation triggered by a viral infection and promote the growth of beneficial gut bacteria, many of which have immune-enhancing properties.

Finally, Elderberry also fine-tunes the cellular redox state, or the balance between reactive oxygen species (ROS), reactive nitrogen species (RNS), and their scavenging by antioxidant compounds. The cellular redox state plays a critical role in the immune defense against viral invaders. When ROS and RNS accumulate in viral infections and antioxidant systems are depleted, a severe inflammatory response called a “cytokine storm” can occur. The cytokine storm incites a massive release of inflammatory mediators called cytokines that damage vital tissues such as the heart and lungs. Elderberry phytochemicals called anthocyanins boost the cellular redox potential, enhancing cellular resilience against pathogens. 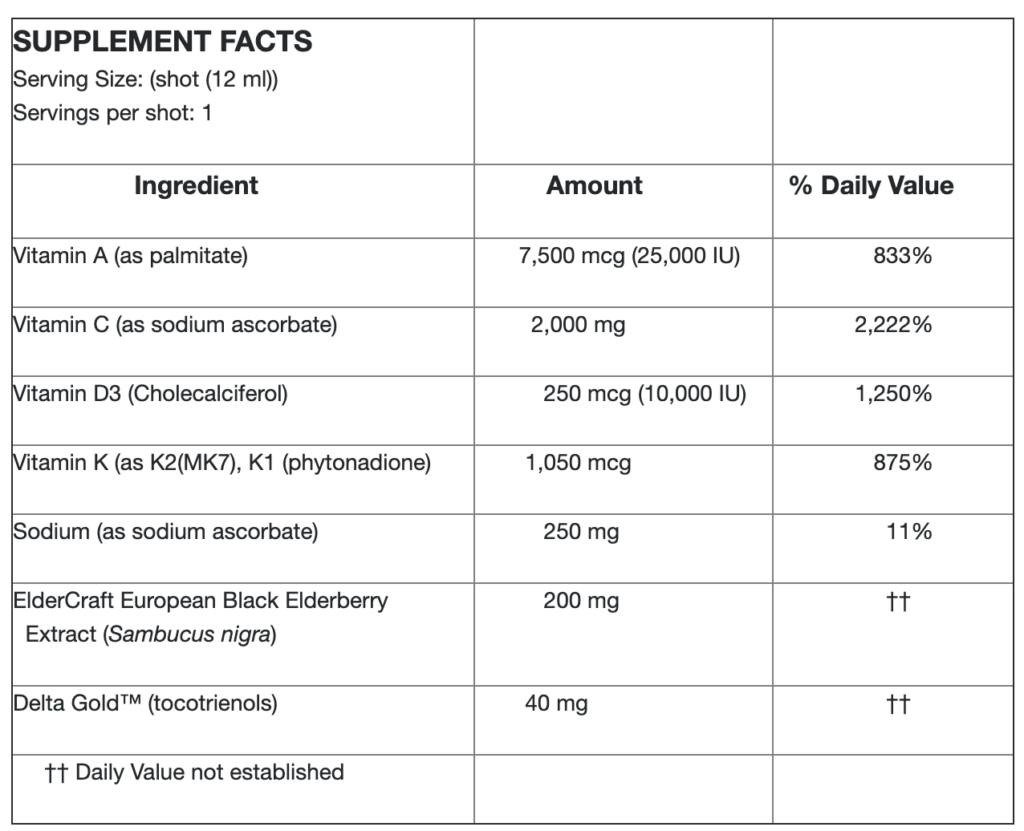 Ocassional Use: If you normally take our foundational supplements consisting of a therapeutic multivitamin, essentials fats with vitamin E, a powerful Vitamin C /Antioxidant formula, Vitamin D, and Rejuvenate! PLUS or Rejuvenate! Berries & Herbs, then take one (1) shot of IMMUNE CHARGE+ whenever you expect to be in a situation where you may be exposed to microbial attack.

Regular Use: Take one (1) shot of IMMUNE CHARGE+ daily for up to ten days. Thereafter, take up to four (4) shots per week, or as directed by your healthcare professional.

Intensive Use: Take two (2) shots of IMMUNE CHARGE+ daily for up to five days. Thereafter, take up to four (4) shots per week, or as directed by your healthcare professional.

Directions: Hold IMMUNE CHARGE+ shot in mouth 30 seconds or more before swallowing. Take on an empty stomach at least 10 minutes before meals. Use within 60 days of opening. If pregnant consult a physician. Store at room temperature. Refrigerate after opening.

Quicksilver Delivery Systems® utilizes modern science to unleash the curative power of nature. With the world’s most advanced phospholipid delivery systems, Quicksilver Scientific supplements can help to nourish your cells and fortify your body as they deliver their core effective ingredients faster and more efficiently.

In addition to exceptional absorption rates, Quicksilver’s nanospheres have the demonstrated ability to cross the blood-brain barrier, deposit their cargo intracellularly, and enter lymphatic circulation. Additionally, the phospholipids that compose the liposome shell (primarily phosphytidtylcholine) feed the cell membranes. This ensures proper function for absorption of nutrients, and excretion of cellular waste products and toxins.

† ElderCraft® is a registered trademark, exclusively licensed to Ipona AG/SPA 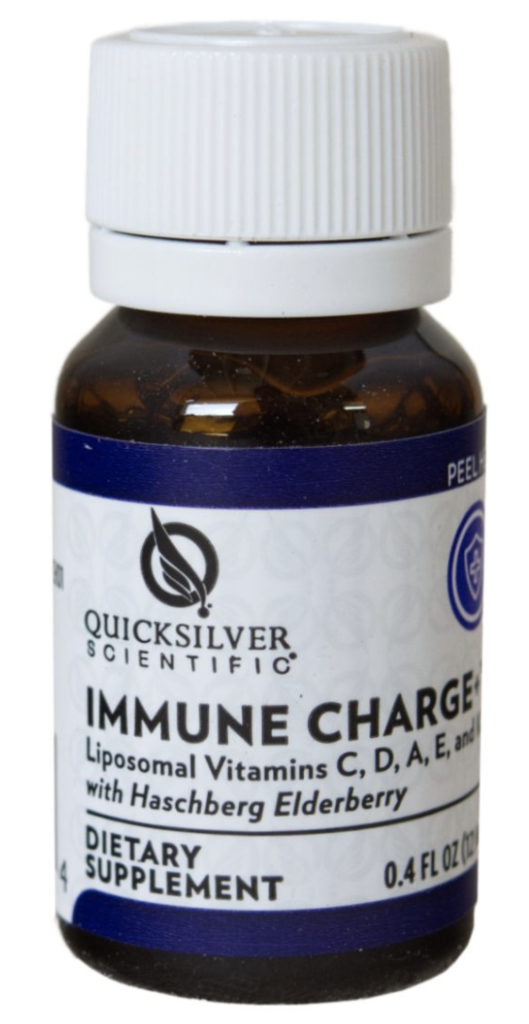