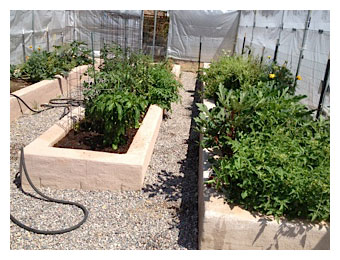 I love to grow vegetables in my backyard and have been doing so on-and-off for 50 years now. It’s such a pleasure to prepare the soil, plant the seeds/seedlings, tend them as they grow, and finally enjoy the harvest. My thumb is relatively green, so harvests have been plentiful and tasty. Possibly, something rubbed off from watching my father do his gardening. He was a very serious gardener and fed his family from the garden during WWII.

However, during the last 25 years my interest in gardening grew much more focused. As I became a designer of nutritional supplements and had to nourish my wife who had become chemically sensitive, I was keenly aware that the foods and supplements we consume are of the upmost importance.

Due to her chemical sensitivities since 1985, for example, my wife finds it necessary to eat only organically grown foods. The penalty she pays for eating any non-organic foods from the supermarket are severe joint pains all over her body! For years, I travelled 120 miles every Saturday to purchase a week’s supply of organic fruits and vegetables.

I read incessantly to understand how to be truly healthy — and because I was now house chef — how to prepare truly healthy meals. I learned about a place called Findhorn in Scotland where a group of people were growing astoundingly healthy and huge vegetables using special growing methods that I recall included something called “rock dust.”

After we moved to Southern Arizona in 1993, I heard from a friend about worm beds and castings and started a worm bed in our yard. Shortly thereafter, I purchased a 50 pound bag of rock dust and started using it along with a product called EM (“Effective Microorganisms”) that enhanced the soil with beneficial microorganisms. Our neighbors and gardener found it hard to believe the plants we grew were so healthy and productive! We continued enhancing the soil and enjoyed a highly productive garden for years.

Then in 2009, I built several very large raised beds so that I could control the soil more completely and purchased a 50 pound bag of rock dust (Agrowinn Minerals) from a company in Southern California (www.fertilizeronline.com). Using this rock dust along with plenty of compost I grew amazingly large and healthy vegetables such as zucchini, squash, tomatoes, eggplant, peppers, parsley, etc. I used these vegetables daily in preparing salads, stir fries, soups, and other dishes.

My wife felt so good eating these garden-fresh (and mineral-rich) dishes, she thereafter refused to eat anything except meals prepared from garden produce! Now, something in my head started to churn! Our high quality garden foods make an enormous difference to the person eating them. Everything I’d read and heard about trace minerals is true: our health depends upon it!

In 2011, I hired a new employee (Linda Leigh) who runs a side business (Vermillion Wormery) raising red wiggler worms. I learned from her how to use worm castings tea (and I built another worm bed that effectively recycles all of my organic kitchen wastes). When done correctly, vermicompost tea produces a huge number of aerobic microorganisms that take up nutrients from the soil (including rock dust), and then convert them into organic forms readily available to garden plants.

More recently, I learned that in the aftermath of the Chernobyl nuclear disaster in the Ukraine, dairy cows consuming grass fertilized with rock dust had no radiation in their milk. Yet, cows just down the road eating grass not fertilized with rock dust had radiation in their milk! This indicates when you are replete with the proper amount of trace minerals your body needs, you will NOT absorb minerals of a similar nature that are radioactive (e.g., cesium-137 and strontium-90)!

In these times, when our health is adversely affected by a broad range of environmental, nutritional, and lifestyle factors, it’s important to know you can easily grow your own super healthy foods, especially using the methods I describe (above). Growing your own organic and biodynamic foods is a major step towards creating super health for yourself, as well as for your family, friends, and pets.

As it turns out (not unexpectedly!), another benefit of gardening and farming is better immunity and health through exposure to soil microorganisms. Thus, it appears that in addition to the benefits of eating mineral-rich garden produce, simple exposure to soil microorganisms in “a little dirt” while gardening is itself a very good thing for health! For more information on this subject see our blog article entitled “A New View of the Role of Bacteria in Health“.

Note: you may also enjoy my related blog post (from June 14, 2012): Living with Radiation: Protection Starts Today. That post deals with specific measures (diet, supplements, etc.) you can use to protect yourself from radiation.

The best place to buy rock dust and worm castings in the USA:
http://www.fertilizeronline.com/

Here is a place in Scotland that tells their story about rock dust:
http://planetthrive.com/2010/01/transforming-barren-land-into-fertile-ground/

This website is all about remineralization of the earth. Highly recommended!
http://remineralize.org/

Here is an excellent website on worm castings, including worm castings tea:
http://www.mypeoplepc.com/members/arbra/trinity/id14.html

For those interested in the details of soil biology, here is an online book on the subject:
http://soils.usda.gov/sqi/concepts/soil_biology/soil_food_web.html

One of the most significant developments for nutrient uptake and assimilation is the advent of liposomal delivery systems.…
Read More
0
0
0
The Orthomolecular Medicine News Service (OMNS) published on June 12 “The Need for Iodine Supplementation.” We believe strongly…
Read More
1
0
0
We live in a digital world enjoying convenient and limitless access to people, information, and the Internet of…
Read More
0
0
0
It has finally arrived — the exciting new Terraflora™ synbiotic. A synbiotic is a combination of probiotics and…
Read More
0
0
0
Recent revelations regarding massive leaks of radioactive water from the Fukushima nuclear complex in Japan are spurring health…
Read More
0
0
0
SUPPORTING PROTOCOLS FOR REJUVENATION: MAGNESIUM CHLORIDE In this article I present another supporting protocol in our Master Rejuvenation Program:…
Read More
0
0
0