I have been excited about the ongoing research concerning the human biome ever since preparing my blog article entitled “A New View of the Role of Bacteria in Health” in June of 2012.

I was particularly impressed by a TED talk of Dr. Bonnie Bassler concerning how bacteria communicate with each other (“Discovering Bacteria’s Amazing Communication System“) on TED.com.

I came away from Dr. Bassler’s talk with a new understanding of who we are and how we are influenced by bacteria. The fact that our bodies house ten times the number of bacteria than the number of cells in our bodies and 100 times the amount of DNA compared to our human DNA is very impressive!! Of particular note was the fact that bacteria conduct both intraspecies and interspecies communication using carbon-based hormones.

Since that time my company switched to a soil-based organisms (SBO) probiotic formula called Prescript-Assist as our main probiotic formula. The formula includes a “prebiotic” called leonardite.

Leonardite is a natural form of humates that is completely organic in nature and provides ideal conditions for “good” bacteria to grow. It is a soft, waxy, black or brown, shiny, vitreous mineraloid that is easily soluble in alkaline solutions.

Leonardite is an oxidation product of lignite, a soft, brown combustible sedimentary rock formed from naturally compressed peat. Lignite has a carbon content of 25–35% and embedded in the carbon are special carbon-based molecules that were produced by soil bacteria millions of years ago.

The amazing part of this story is that Dr. Zachary Bush—a medical doctor with extensive experience in cancer research and mitochondria chemistry—made an accidental and instant connection between the special carbon molecules of lignite and special redox molecules found in mitochondria.

Based upon his recognition of these similar molecules, he developed a formula using the lignite bacterial produced carbon molecules. He found that by adding certain trace minerals and amino acids under special conditions these carbon molecules were activated.

Upon giving his formula to human beings, Dr. Bush discovered dramatic and rapid increases in beneficial gut bacterial counts. That is, the human microbiome was significantly affected in a positive way. This is particularly important since it is known that the human gastrointestinal tract houses about seventy percent of our immune system. 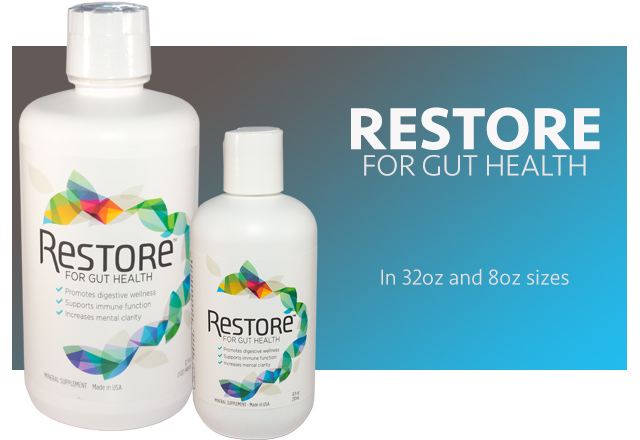 The most amazing part of the story was then discovered. That is when the formula (called RESTORE) was given, the tight junctions in the gut were restored to their optimal condition and “leaky gut” disappeared.

What makes this discovery so special is that “leaky gut” is caused by certain toxic bacteria, gluten, antibiotics, medical anti-inflammatories, and especially the herbicide glyphosate (RoundUp) used for genetically modified (GMO) food crops. This “leaky gut” condition is endemic in our society and getting worse as we continue to take in these toxic substances in ever increasing amounts. In Dr. Bush’s experience with a very broad range of conditions, healing began to occur very quickly when RESTORE is taken.

HOW EXCITING!!! Based upon this almost unbelievable discovery we have decided to carry RESTORE in both 32 oz and 8 oz sizes on our retail website. We take it ourselves!!!

To learn more about RESTORE and its discovery listen to this talk by Dr. Bush.

One of the most significant developments for nutrient uptake and assimilation is the advent of liposomal delivery systems.…
Read More
0
0
0
We live in a digital world enjoying convenient and limitless access to people, information, and the Internet of…
Read More
0
0
0
The emergence of diabetes in epidemic proportions has become one of the most weightiest (pun intended) health issues today.…
Read More
0
0
0
The Orthomolecular Medicine News Service (OMNS) published on June 12 “The Need for Iodine Supplementation.” We believe strongly…
Read More
0
0
0
It has finally arrived — the exciting new Terraflora™ synbiotic. A synbiotic is a combination of probiotics and…
Read More
0
0
0
When I first learned about Nrf2 activators in early 2012, I became quite enthusiastic about new knowledge that…
Read More
0
0
0