Cranberries (Vaccinium macrocarpon) are native to the boggy regions of temperate and subalpine North America and Europe. Although Native Americans used them extensively, they were first cultivated in the U.S. in the early 19th century. Cranberries grow on viney plants belonging to the heath family Ericaceae that also includes blueberries, bilberries, huckleberries, and bearberries (Arctostaphylos uva ursi). Cranberries contain tannins, fiber, anthocyanins (and other flavonoids), and Vitamin C. Their tannins prevent bacteria from attaching to cells. Consequently, cranberries have been used against infections, including urinary tract infections. In addition, cranberries may be helpful in protecting against heart disease and stroke.

Cranberries are an especially good source of antioxidant polyphenols. In animal studies, the polyphenols in cranberries have been found to decrease levels of total cholesterol and so-called “bad” cholesterol. Cranberries may also inhibit the growth of tumors in human breast tissue and lower the risk of both stomach ulcers and gum disease.

Here is a list of the antioxidant and anti-inflammatory phytonutrients in found in cranberries.

For more information on cranberries visit the sites given below:
https://www.healthambition.com/health-benefits-of-cranberry-juice/
or
http://www.whfoods.com/genpage.php?tname=foodspice&dbid=145

Scientific Studies on the Antioxidant Effects of Cranberry

Below, I provide relevant scientific studies on the antioxidant effects and potential health benefits of cranberries.

Prevention of oxidative stress, inflammation and mitochondrial dysfunction in the intestine by different cranberry phenolic fractions.

Cranberry fruit has been reported to have high antioxidant effectiveness that is potentially linked to its richness in diversified polyphenolic content. The aim of the present study was to determine the role of cranberry polyphenolic fractions in oxidative stress (OxS), inflammation and mitochondrial functions using intestinal Caco-2/15 cells. The combination of HPLC and UltraPerformance LC®-tandem quadrupole (UPLC-TQD) techniques allowed us to characterize the profile of low, medium and high molecular mass polyphenolic compounds in cranberry extracts. The medium molecular mass fraction was enriched with flavonoids and procyanidin dimers whereas procyanidin oligomers (DP > 4) were the dominant class of polyphenols in the high molecular mass fraction. Pre-incubation of Caco-2/15 cells with these cranberry extracts prevented iron/ascorbate-mediated lipid peroxidation and counteracted lipopolysaccharide-mediated inflammation as evidenced by the decrease in pro-inflammatory cytokines (TNF-α and interleukin-6), cyclo-oxygenase-2 and prostaglandin E2. Cranberry polyphenols (CP) fractions limited both nuclear factor κB activation and Nrf2 down-regulation. Consistently, cranberry procyanidins alleviated OxS-dependent mitochondrial dysfunctions as shown by the rise in ATP production and the up-regulation of Bcl-2, as well as the decline of protein expression of cytochrome c and apoptotic-inducing factor. These mitochondrial effects were associated with a significant stimulation of peroxisome-proliferator-activated receptor γ co-activator-1-α, a central inducing factor of mitochondrial biogenesis and transcriptional co-activator of numerous downstream mediators. Finally, cranberry procyanidins forestalled the effect of iron/ascorbate on the protein expression of mitochondrial transcription factors (mtTFA, mtTFB1, mtTFB2). Our findings provide evidence for the capacity of CP to reduce intestinal OxS and inflammation while improving mitochondrial dysfunction.

Chemical characterization and chemo-protective activity of cranberry phenolic powders in a model cell culture. Response of the antioxidant defenses and regulation of signaling pathways

It is known that cranberry inhibits the growth of Helicobacter pylori (HP). In human stomach, HP basically induces chronic inflammation by stimulating stomach cells to secrete interleukin (IL)-8 and other inflammatory cytokines, and causes stomach cancer, etc. The aim of this study was to investigate the inhibiting effects of cranberry on HP growth and IL-8 secretion from stomach cells induced by HP, using clinically separated HP strains. HP growth in liquid culture and on-plate culture was evaluated by titration after 2-day incubation and by agar dilution technique, respectively. For IL-8 experiments, MKN-45, a stomach cancer cell line, was incubated with HP for 24 h and IL-8 in the medium was assayed by ELISA. Cranberry suppressed growth of the bacteria only in six of the 27 strains. Meanwhile, it suppressed IL-8 secretion in all the strains. The results may suggest a possible role of cranberry in prevention of stomach cancer by reducing gastric inflammation.

Increased oxidative stress in obese diabetes may have causal effects on diabetic complications, including dyslipidemia. Lipopolysccharides (LPS) along with an atherogenic diet have been found to increase oxidative stress and insulin resistance. Cranberry has been recognized as having beneficial effects on diseases related to oxidative stress. Therefore, we employed obese diabetic animals treated with an atherogenic diet and LPS, with the aim of examining the effects of cranberry powder (CP) on diabetic related metabolic conditions, including lipid profiles, serum insulin and glucose, and biomarkers of oxidative stress. Forty C57BL/KsJ-db/db mice were divided into the following five groups: normal diet + saline, atherogenic diet + saline, atherogenic diet + LPS, atherogenic diet + 5% CP + LPS, and atherogenic diet + 10% CP + LPS. Consumption of an atherogenic diet resulted in elevation of serum total cholesterol and atherogenic index (AI) and reduction of high density lipoprotein (HDL)-cholesterol. However, with 10% CP, the increase in mean HDL-cholesterol level was close to that of the group with a normal diet, whereas AI was maintained at a higher level than that of the group with a normal diet. LPS induced elevated serum insulin level was lowered by greater than 60% with CP (P < 0.05), and mean serum glucose level was reduced by approximately 19% with 5% CP (P > 0.05). Mean activity of liver cytosolic glutathione peroxidase was significantly increased by LPS injection, however it was reduced back to the value without LPS when the diet was fortified with 10% CP (P < 0.05). In groups with CP, a reduction in mean levels of serum protein carbonyl tended to occur in a dose dependent manner. Particularly with 10% CP, a reduction of approximately 89% was observed (P > 0.05). Overall results suggest that fortification of the atherogenic diet with CP may have potential health benefits for obese diabetes with high oxidative stress, by modulation of physical conditions, including some biomarkers of oxidative stress. 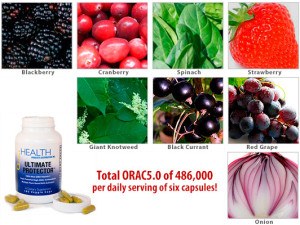 Cranberries are an important fruit full of polyphenols, anthocyanins, antioxidants, and Nrf2 activators that help to make Ultimate Protector such an outstanding nutritional supplement.

One of the most significant developments for nutrient uptake and assimilation is the advent of liposomal delivery systems.…
Read More
0
0
0
We live in a digital world enjoying convenient and limitless access to people, information, and the Internet of…
Read More
0
0
0
Dr. Hank Liers formulated Ultimate Protector as an extremely powerful, triple-action antioxidant, vitamin C, and Nrf2 activator that provides…
Read More
0
0
0
The Orthomolecular Medicine News Service (OMNS) published on June 12 “The Need for Iodine Supplementation.” We believe strongly…
Read More
1
0
0
When I first learned about Nrf2 activators in early 2012, I became quite enthusiastic about new knowledge that…
Read More
0
0
0
The term “ORAC” (standing for “Oxygen Radical Absorption Capacity”) describes a test developed by Brunswick Labs as an analytical tool for…
Read More
0
0
0